Furries - are you attracted to stuffed animals? Would you like to be one?

How many out there can do furrie animal impersonations?
I don’t mean their sounds or the way they move. I mean, their furry outer skin. So appealing is this prospect to many that they clothe themselves in animal outfits from head to toe. leaving no human part exposed. This has progressed to the point where it is now recognized as a whole new fetish sub-genre “Furries”.

Welcome to the world of the “furry”. As you might expect there is some overlap with another fetish: people who are sexually drawn to stuffed animals. These are known as “plushies”. Some people start off as plushies but progress to being furries.

What animal would you be? 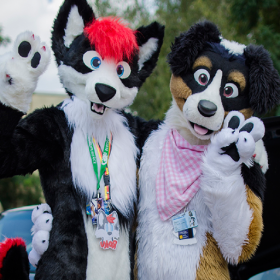 They are related but different. Check out this item from Vanity Fair, back in 2001.

The Call Of The Wild

I can see the appeal of this pastime up to a point – but several problems present themselves.

One is that animal costumes are surely going to be very hot when worn indoors. A second problem is how to deal with the spooge that will be the inevitable result of a yiff session.

Do you really feel like taking the suit to be dry-cleaned.?

There is a further discussion in Salon about how “cosplay” (costume play) enables players to erase others’ preconceptions about themselves with regard to race, gender and appearance.

In the words of George Gurley who wrote the piece for Vanity Fair:

The advent of Ebay has enabled what was previously louche and obscure to be readily available.

There is even a made-to-measure service available for real fans.

Which animal do you fancy?