Elite Mistress Directory had the privilege of an audience of Lady Seductress, an established pro-domme working in Central London. 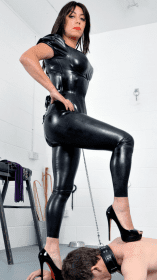 When I am in total control of a submissive, I simply feel at home. The power is what I am both used to and is something I thrive on. Even in a brief power dalliance I get a kick out of wielding it (power). One would think it may become run of the mill but the more control I have the more I want. 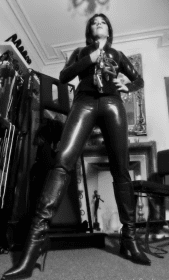 A favourite tool for Corporal punishment

I see you list CP and caning on the activities that you enjoy. Which is your favourite tool for CP?

CP is one of my favourite activities – I could go on at some length explaining the various attributes of the tools I deploy – and why each appeals to me. for example,- I love the elegance of the cane – the way it slices through the air and makes sharp contact on the subject’s skin; then there is the flogger which I really enjoy the sound and dynamics of and the fact that it can be used more in a more subtle manner.

I’ve a good variety of paddles too and dependent on the material they are made of one gets a different result, which I enjoy experimenting with, at times.

A big turn on

From having a male both under and worshipping my feet to having one encased in my latex body bag, nipples exposed and tortured, to dressing a sissy, teasing them and having them ordered about at my every whim…

It’s important for me to get it right in both the physical and psychological sense – dressing up in the appropriate clothing speaks volumes and as always, I would prepare my chambers – setting the tone with lighting and perhaps music. It would be ridiculous to claim to have experience in every scenario so if there is something requested that is a little new I seek out similar stories from the internet to take inspiration.

Encountering a new potential submissive is always a challenge – in a good way, I mean.

Submissives should note that I take disobedience very seriously. It cannot go unpunished. Thankfully the majority of slaves are not openly disobedient but I must say that where there is life there is fault and I will always find something to be punished even if the disobedience is not blatantly apparent.

The latest punishment bestowed upon a disobedient slave was firstly, electrocution to the balls which were then subject to a ball-breaking by heel and then fist, followed by total denial of orgasm by placing pegs on the end of his foreskin (to attain complete closure and restriction) as I sat on his face and smothered him for 2 minutes and 35 seconds exactly – he was then sent packing after a sound over-the-knee spanking.

I believe there to have been somewhere in the region of 300 strokes because, by gosh, my hand was smarting – meaning that he is therefore owed further punishments on his next visit – whether he does as he is told or not.