The more sensitive a person is to rubber play in general and to rubber suits, straightjackets, and sleepsacks in particular, the less hair they have.
It’s just basic mechanics.
Because hair works as an insulator, a guy with a thicker coat of hair is less vulnerable to the effects of wind, cold, and other environmental factors.
Since there is no hair to get in the way, the rubber can make direct contact with the skin, and since shaving removes the top layer of dead skin, the inherent sensitivity is heightened, so a shaved guy makes for a very sensitive receiver.When a guy shaves, he is basically taking away his manhood so that he can be put in rubber, which can be a very submissive experience.

Rubber’s impermeability means it can’t let any moisture through, so it absorbs perspiration and mixes it with the body’s natural oils to make a lubricant.
A slave wearing a rubber suit doesn’t require much lubrication before play.
Light exertion is OK, but you should avoid losing too much fluid.
Be sure to stock up on water. 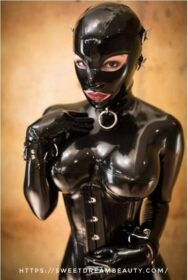 Rubber is amazing for stimulating your senses.

When it comes to rubber appealing to guys, the power of the aroma is hard to overstate.
In mild and temperate climates, the rubber scent is not very strong or apparent.
A rubber-clad person doesn’t give off a particularly strong odour unless you start heating it up and add a sweaty person inside.
The aroma can be somewhat sexy or overpowering, depending on whether the person inside has bathed lately or left it for many days for added enjoyment.
Considering that we are mammals with a high metabolic rate, it stands to reason that we perspire and emit a certain odour.

Obviously, we won’t have the same scent as leather, but there is a certain odour that is characteristic only of latex and the person wearing it.
And by the way, gentlemen, for the heterosexual audience, women tend to be repulsed by male perspiration, which I believe is due to pheromones.
On the other hand, when they start ovulating, that odour goes from being unpleasant to being sexually appealing.
I mean, what the heck?
The odour of a man’s locker room or jockstrap isn’t particularly irritating to women, although it may be strong.

The visual impact of rubber

The visual impact of latex hoods on both the master and the slave may be enormous.
If your slave is being prepped for your evening of pleasure, not “Johnny,” your boyfriend.
It gets rid of face-to-face interaction and the natural bond that forms between people, turning everyone into a faceless slave, a hooded slab of meat to be used, abused, or otherwise dispensed with as you see fit.

It can be dangerous to play with rubber hoods. Make sure you are in good hands.

Depending on the slave’s endurance, the latex hood can keep them hidden for several hours or even days.
Because of the perspiration and general “gucky” feeling that hair tends to have after being in rubber for so long, most people agree that 24 hours is plenty.
However, if you shave your head, you won’t have to worry about your hair for at least a few days, and maybe even a whole week!

Additionally, rubber hoods have an encasement property where the hood shapes itself to the wearer’s head.
This is especially the case with thinner latex hoods, but it is also true with thicker latex and rubber hoods.
Numerous fantasies have the enslaved person being undressed, shaved from head to toe, and then smacked in the face with a rubber mask.
It completely removes two of humanity’s basic senses—sight and sound—while significantly enhancing the third.
The “snappy” nature of latex may also be employed to great effect; you can now get a red mark on the bottom without even picking up a paddle or whip.

Obviously, latex hoods are considerably more likely to produce claustrophobia than leather or metal ones, just due to the feeling they give the wearer.
The user runs the risk of being stifled by the lack of ventilation.
And this is where the psychological side comes in.

Wearing a latex hood may have a profound influence on the wearer’s psyche.
Latex hoods are claustrophobic, so wearing one can have an immediate effect on the wearer’s mood.
Putting on a hood may make a slave a lot more compliant and obedient, especially if it prevents them from seeing.
Making someone blind has a relaxing effect, much like it does on animals.
After donning a latex hood, you will feel like you are in solitary confinement. 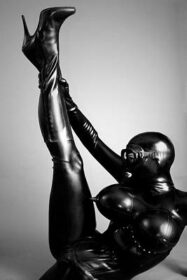 Which latex hood is for you?

Variety-wise, latex hoods are particularly well-represented.
ones with sci-fi details, such as moulded insect eyes or glass lenses and a moulded alien mouth, or an inflated one with tubes for the nose and mouth, etc.
A single-layer moulded hood, as well as an alien thick rubber hood with a solid rubber pecker gag, are available.
In addition, if you want to add an extra-special touch, you may pair the latex or rubber hood with gas masks.
If you want to pour liquids into your posterior, you may get a latex hood with a tube and a funnel connected to it.

If you are looking for some leather pieces to go with your collection, you can always look at some of the wonderful and rubber outfits which Elite Sex Toys has to offer

Okay, I’ve had enough reading about it.
It’s time you went out and discovered the joys of rubber play.
It will make everything more intriguing and open up a world of new opportunities.

Sexual Cannibalism
Sexual cannibalism what is it?The costs and rewards for both the cannibal and the victim in the case of sexual Read more