My earliest memories of being incredibly excited by something that I would later realise was a kink of mine began around the age of 5 or 6. Naturally, I didn’t recognise it as sexual arousal at the time. More a deep fascination with a scene that I would see in a film. Or, a role-play that I would act out with my friends. I would also regularly question my history teachers on EXACTLY; What would happen to slaves who ran away but were then caught? I’d would delight in hearing the gory details. Though the teachers would never indulge me as much as I hoped! 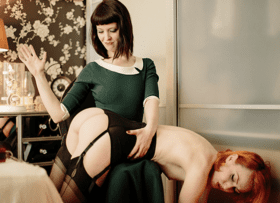 I have now been practising as a professional Domme, UK London Mistress, Elita Darling for almost 2 years, though I have been working in the fetish industry for 5 years.

It’s such an incredible buzz when I’m in a good session with a responsive sub. A responsive sub really does make so much difference to a scene; if I can feel the electricity, it will leave me floating long after the session has finished. I always feel very charged when I have a submissive who is expressive, and it brings out the best in me as a Domme.

I am naturally a very curious person. And mischievous. I love teasing and I am generally a very sexual person; I think this comes across in my personality a lot. Equally, I am also often likened to Mary Poppins, though a very sadistic version of her!

I do go in for ‘mental domination’ and part of this is role-play. Though it is certainly not a massive part of how I play in general. When given the opportunity, I adore being a strict punisher or governess. Dishing out a traditional caning. I also enjoy more taboo role-play that I probably shouldn’t go into here! 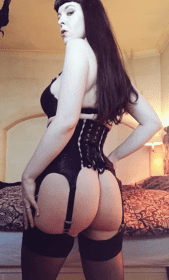 I enjoy what someone once described to me as a ‘positive feedback loop’; that is to say that my arousal will arise from seeing how turned on my submissive is, and how much he wants me.

Intimate worship is also very stimulating for me (as is teaching my sub precisely and exactly how I like to be worshipped!).

As UK London mistress, Elita Darling I always look to gain complete control over another individual in a session. I think that beautiful moment when I feel my submissive ‘give up’ is something I will happily chase over and over again. I never get bored of it! That look that he or she gives me to let me know that they are mine, and that I have them right where I want them; that is what I most yearn for.

Respectful at all times

Every sub is different, and my feelings towards them when we first meet varies from sub to sub. I think my style of domination is quite organic; as hippy-ish as it sounds. I really do feel the energy from someone as soon as I meet them. Additionally, I will decide how to approach the session from there.

I am generally in favour of diving right in from the moment they walk in, but if I feel that someone is a little nervous or needs to talk, I will start that way instead. I expect a sub to be respectful. Alsoand I hope that they will trust me enough to give themselves to me in our time together. I also think a little chat afterwards is very important; it gives me closure on the session and it allows my sub to give me feedback, also allowing them to get to know me a little more deeply.

I can make a grown man cry 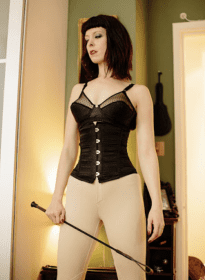 I have subtle ways of dealing with disobedience. US London Mitress, Elita Darling can be really very sadistic. But, I find that my sadism will generally present itself in many different ways – not just in hurting someone physically.

UK London Mistress, Elita Darling finds it much more satisfying to touch on aspects of my submissive’s sexuality that are deeper and more powerful than the skin on his bottom. I must confess that making a grown man cry is certainly a big sexual stimulant for me.